We have passed level 3 and are now looking for our forth link to my most coveted actor.

If anyone has any ideas I’d like to hear them…anyone? somebody?

What can I say? I love boys with red(dish) wavy hair who don’t always make much sense. I especially love when they wake up super early for me. Especially when the reason they’re waking up super early for me is a ghetto-ass garage sale. Ya, it didn’t go that well but I did end up finding out the name of the nice old bag lady who lives down the street- Carmella. Such a pretty name.  The last time she bought something from me was when I was selling old records. Amongst the ones that she purchased were a highly passionate pastel woman and some punk band from some city that I never cared enough to figure out. Today she bought a bag of old jewelry for $5. My first costumer. She lives in a big house down the street filled with (seemingly) Italian thirty or forty something year old children. When I met her raspy voiced daughter she gave me a huge hug and wished me luck with my trip to Paris (which I bought my ticket for, did I mention?). I feel like they’re my only connection to this neighborhood. I still can’t tell if I’m going to be sad or not when I move. I applied to Mesa. Nerves. Nerves. Nerves. All of it makes my anxiety flutter. Fuck you Future.

This is what Brandon would look like with man boobies and a grown out job hunting haircut.

Tagged as ben kwellet, i"m not scared, I'm going to do it, I'm okay, man boobies

A COMEBACK I JUST THOUGHT OF TO SOMETHING THAT HAPPENED TO ME SOPHOMORE YEAR:

“Isn’t Chanel foundation really expensive though? I figured you wouldn’t use so much.”

So simple and yet so deadly.

I went and took the third test of four math packets for a class I failed 2 years ago. I failed this test (the 2nd one so far) and when I walked out I couldn’t help but cry. I looked down and saw an ant that I tried hard not to step on.  I should have, though, as revenge for it never having had to take a math class before.

I’m feeling awkward. What have I done? Nothing really but I become destroyed over small things.

Last night I dreamt about a huge rocket that took us to an even larger rocket that took us to Mars. The seats were like the ones that they place you in when they check you for anemia or cancer or give your blood to someone with sickle-cell. People fought and fought as I washed my hair at the control center. A tall gentleman with purple pants and a blue shirt told me it smelled good.

I really liked him but I’ve dreamt with him before so the appreciation was already there. I especially love his masterful use of the trumpet.

“I trumpeted all the way home…because it felt good.”

I just accidently deleted my Pay Pal donation button. In the midst of my realizing that I breathed hard and sharp but then all returned to normal because J’ai réalisé that no one is going to give me money that way. It’s ok, my sidebar was looking too crowded anyways.

I was also meaning to say, I’m thinking that the drawing of the lightbulb girl may be what I want as a tattoo. Simple and personal, with white writing that says…I’m still thinking about that part.

I shouldn’t be here right now, I should be at school but I’m not even ready yet.

I found out that the house I am going to be living in when I visit Paris is in the same neighborhood as their president.

I’ve been meaning to show you these.

Tagged as Art, digital coloring, drawings, HI, how are you?, I have truly seen the worst, Quelque Chose, volume one

I CAN FEEL YOU.

On Contrariwise.com I stumbled upon this:

A tattoo for the blind. This one reads sun. I have to say that the thought of touching it makes me feel ill but the thought of feeling it, with my eyes closed and my fingers stretched flat, moving past the sense of skin and into the sense of the word itself, seems like finally being able to kiss the words that make you stop.

It makes me think, if I, fickle fickle fickle, were to get a tattoo what would it be? For every mistake I made a section would disappear and words would be just blankets that have too many holes. I don’t want to make a mistake like this because, lord knows, if I cry over bad haircuts then I will wail (for ages) over a shitty tattoo.

Maybe Padam. It doesn’t mean anything at all but the way Edith said it, it meant…well, you know.

That would go in my lip. But anywhere else I’d want a white ink tattoo. One that says Ça Va or maybe Dinoisy or maybe See More Glass because I love him. Je ne sais pas. Maybe Je ne sais pas.

YOU MAY FORGET BUT

LET ME TELL YOU

WILL THINK OF US

THE TEN DEGREES OF PHILIP SEYMOUR HOFFMAN or WHEN I SAID TOMORROW, I ACTUALLY MEANT NEXT WEEK.

Sometimes I feel bad when other people are in the picture with me because I make them look bad…because I’m so beautiful…ya.

Brandon and I are playing the (cue ominous man voice) Ten Degrees of Philip Seymour Hoffman.

10 degrees because 10 movies are better than 6 and Hoffman because he’s better than Bacon (vegetarian joke…BAHAHA!)

Our first link is Amy Adams in Julie & Julia which, I must add, was surprisingly good. It made Brandon laugh hysterically at one point but I’m not sure if it was just because he had a horrible migraine and was on the verge of delirium or because he actually thought it was funny. Either/or. 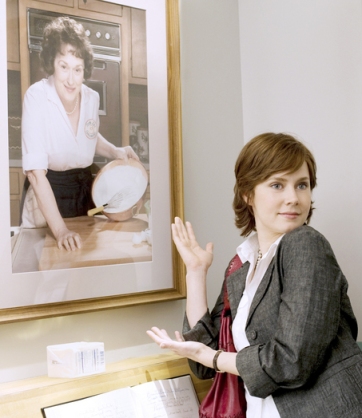 Our second link is Amy Adams –> Emily Blunt in Sunshine Cleaning which we haven’t finished yet but is depressing me none the less. It is about two destitute women who resort to cleaning up murder and suicide left-overs to support themselves…

I think the link from Emily Blunt is going lead us to John Malkovich. If you don’t know who that is, he’s the butt of the world’s most drawn out joke and I’m pretty sure he thinks we’re all laughing with him.

We didn’t map this out so it’s going to be a tad difficult which is the fun of it, anyhow, right my general reader?